In the complex you can see the remains of the fortification of the ancient city, which include a well-preserved section of the southeastern fortress wall, a rectangular watchtower and a granary. Above it there are barracks, where the guards of the fortress towers lived. Of interest is the ancient well, built in the IV-III century BC. Traditionally, tourists toss a coin into it for good luck.

Arch of the ancient city of Apollonia

Aplonia is one of the first settlements on the Balkan Peninsula where Christianity penetrated. In the IV century Apollonia became part of the Eastern Roman Empire and fortress walls were built. Then the city was an important center of the diocese, located on the coastal road Via Pontica.

The old part of the city is impressive and to this day many remains of the fortress wall of the ancient city of Apollonia are preserved. The fortress was built in the middle of the 5th century during the reign of Emperor Anastasius (491-518).

The Archaeological Museum of Sozopol is located in the old part of town.

The Archaeological Museum presents the history and millennial cultural tradition of the town of Sozopol from the end of the 6th millennium BC. to the seventeenth century AD.

Ancient Sozopol with the relics of St. John the Baptist was the winner in the ranking “Wonders of Bulgaria”, held in 2011.

The amphitheater was officially opened on April 30, 2015. Access to it is directly from the park alleys. The amphitheater was built under the Operational Program for Development of the Fisheries Sector, FLAG “Primorsko – Sozopol – Tsarevo”. Its capacity is 390 seats. At the level of each row there are paths for visitors, lined with unformed stone slabs. A new children’s playground with outdoor sports and entertainment facilities has been built near the Amphitheater. The sites are in close proximity to the municipal park “St. Marina”.

The medieval monastery “St. Nicholas the Wonderworker” is located between and in close proximity to the southern gate of Old Sozopol and the church “St. Cyril and Methodius”.

The monastery was discovered by chance in early October 2011 during archaeological excavations near the southern fortress wall. It was later established that spiritual life had been boiling in this place since the dawn of Christianity.

The Church of the Assumption of the Blessed Virgin or just the Holy Mother of God is a late medieval Bulgarian church located in the northern part of old Sozopol. It was built in the 15th century on the site of an older Christian church. There is evidence of its existence from 1482, as it was a monastery church at the convent of the island monastery “St. John Prodrom”.

“St. George” is a Bulgarian Revival church in the town of Sozopol, Burgas region. The church is located in the old part of Sozopol. It houses valuable icons from the second half of the 19th century. The church contains fragments of the relics of St. John the Baptist, found on the island of St. John, as well as other Christian relics – a fragment of the Holy Cross and part of the relics of “St. Andrew the First Called”.

Arkutino or Bear Swamp is a swamp-lagoon, located 7-8 km from Sozopol, about 2.5 km northwest of the mouth of the river Ropotamo. The swamp is part of the Ropotamo reserve. It is separated from the sea by sand dunes, and a sand lily grows on the beach. The beach opposite the swamp is also called Arkutino. The swamp is inhabited by a rare fish – dwarf gambusia. Arkutino is the main stopover for birds on the Via Pontica. Rare species of birds nest here.

Ropotamo Reserve on the territory of Primorsko Municipality and is located around the two banks of the Ropotamo River, whose course passes along large sand dunes to its confluence with the Black Sea. On the territory of the reserve there are many interesting and unique natural sites. Visits to the reserve are carried out only on the designated and marked for this purpose 8 paths for visitors. All walking and water routes are marked with signs and information boards.

The Thracian sanctuary Beglik Tash is located in the highest part of Cape Beglik Tash (128 m above sea level) near Primorsko. It is located 28 km from Sozopol. It covers an area of ​​6 decares. The territory on which it is located is forest, it was part of the hunting residence of the former communist head of state Todor Zhivkov (ruled 1954-1989). It is for this reason that one of the greatest discoveries about the Thracian history of our Southern Black Sea coast and Strandzha remained unknown to science until 2003.

The swamp of Aleppo

The Aleppo swamp is located about 7 km south of Sozopol.

The swamp is covered with reeds and other swamp vegetation. The estuary is separated from the sea by a strip of sand dunes, which are also a natural landmark. The area is home to many rare animal and plant species.

The castle in Ravadinovo is a unique attraction for Bulgaria. It is located to the left of the road, before the village of Ravadinovo, 5 km. from Sozopol. It is built of stone and is located on an area of ​​about 30 acres. There is a lot of greenery around, and the building itself is overgrown with ivy. It also has a water park. With its numerous water slides and various restaurants, additional attractions, extensive green areas and various services, Neptune Water Park offers its guests a truly exceptional world-class experience.

Aquapark “NEPTUNE” is located on an area of ​​50 000 square meters, in the area of ​​Ravadinovo, 5 km. from the town of Sozopol and next to the most beautiful and exciting castle in Bulgaria – the Castle “In love with the wind”. The park is located in a natural environment full of color, among many green areas and vast spaces.
On its territory are built a variety of restaurants, relaxation areas and bars that are sure to satisfy the most demanding desires of its customers. The attractions offer their guests a real adventure for the senses and a powerful rush of adrenaline in the body. The numerous water slides, as well as the largest safe children’s Prater in Bulgaria, are only a small part of the water magic in which you will immerse yourself.

Base for water sports Arkutino

The base is located on one of the most beautiful beaches on the Bulgarian Black Sea coast, which has preserved its wildlife and purity. It is located between three reserves and among its attractions are the island of St. Thomas, the mouth of the Ropotamo River and the wild isolated Ropotamo Beach. The base offers training in windsurfing, kite surfing, surfing, sailing catamarans. It has modern equipment suitable for children and adults. We also offer windsurfing, canoeing, surfing, sailing catamaran, kayaks, bodyboard.

You can visit unique places under the water, touch part of the underwater history of Bulgaria, see interesting sunken ships, get a different vacation.

For those who want to achieve perfection, Due Diving Center offers training in technical diving – from a beginner technical diver to diving under 100 meters.

Motor-sailing yacht “Trophy” – you can use it for rent, just for you and your friends or take part in some of the day trips in the bays around Sozopol, camping Garden, Fig and Kavatsite. On the yacht can be held: yacht party, team building, yacht cruise, yacht weekend, yacht trip and even a wedding. For information and reservations, please contact the reception.

This website uses cookies to improve your experience while you navigate through the website. Out of these, the cookies that are categorized as necessary are stored on your browser as they are essential for the working of basic functionalities of the website. We also use third-party cookies that help us analyze and understand how you use this website. These cookies will be stored in your browser only with your consent. You also have the option to opt-out of these cookies. But opting out of some of these cookies may affect your browsing experience.
Necessary Always Enabled
Necessary cookies are absolutely essential for the website to function properly. This category only includes cookies that ensures basic functionalities and security features of the website. These cookies do not store any personal information.
Non-necessary
Any cookies that may not be particularly necessary for the website to function and is used specifically to collect user personal data via analytics, ads, other embedded contents are termed as non-necessary cookies. It is mandatory to procure user consent prior to running these cookies on your website.
SAVE & ACCEPT
Нашите награди 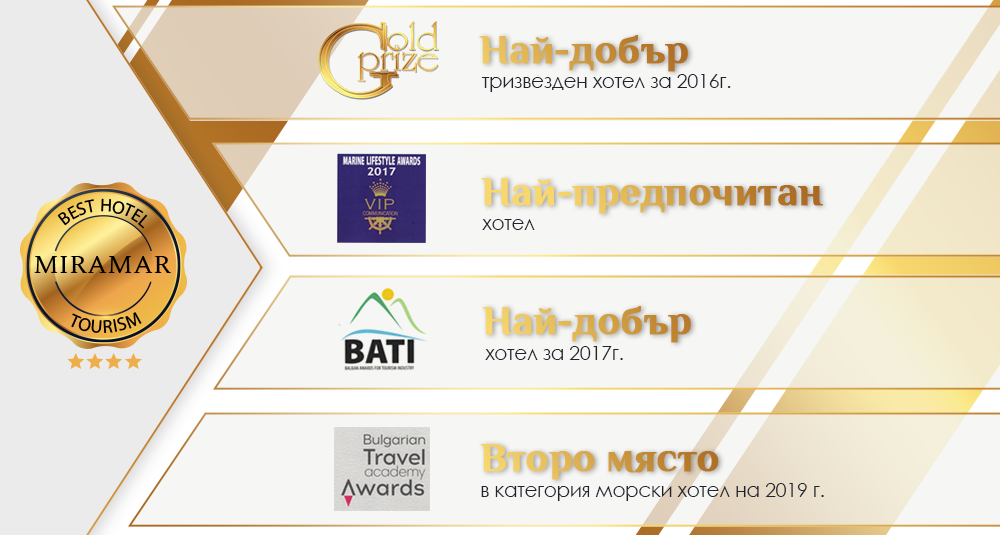